Departed Chennai on Wed. night, fell asleep on the plane before take off, woke up upon de-boarding 5 hours later to find myself in Bangkok, taxied to the hotel and hooked up with Jay and Lea. 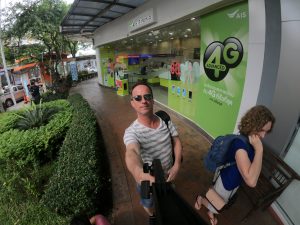 Ate mussels, crab cakes and other asian deliciousness. Barely made a flight to Cambodia(Seim Reap) due to lack of attention to time, bad Uber service, horrible rush hour traffic thru the heart of industrial Bangkok, watching the sunset as we moved along at 3 miles per hour. With less than 30 minutes before our flight, Jay had to “go”, then got his bags searched, found a cork screw and sent him on his way. Meanwhile, I got to the gate, found a long line to the bus that eventually took us to the plane. Bought 2 cold beers for $1, just as Jay sprinted around the corner, pissed, sweating and just in time. We consumed the beer on the bus, a nice asian woman taking our empty bottle as we boarded the plane.

We filled out paper work for various government requirements, the entire 40 min flight to Siem Reap. Customs only took 30 minutes, getting sim cards for our phones took an hour. Hilarious mishaps with their credit card machine, Lea had to help them. Meanwhile, I went to another sim card vendor and she canceled the other. Got on a Tuk Tuk with a driver that we have for the weekend. Staying in a cheap, but, gorgeous air b&b and located across from a park with incredibly loud bugs, Food carts, Restaurants, gecko’s, cat’s, dogs. Stayed up until 3AM, up at 8. Going to the Temples today to see an ancient city that rose around the beginning of the 12 century.