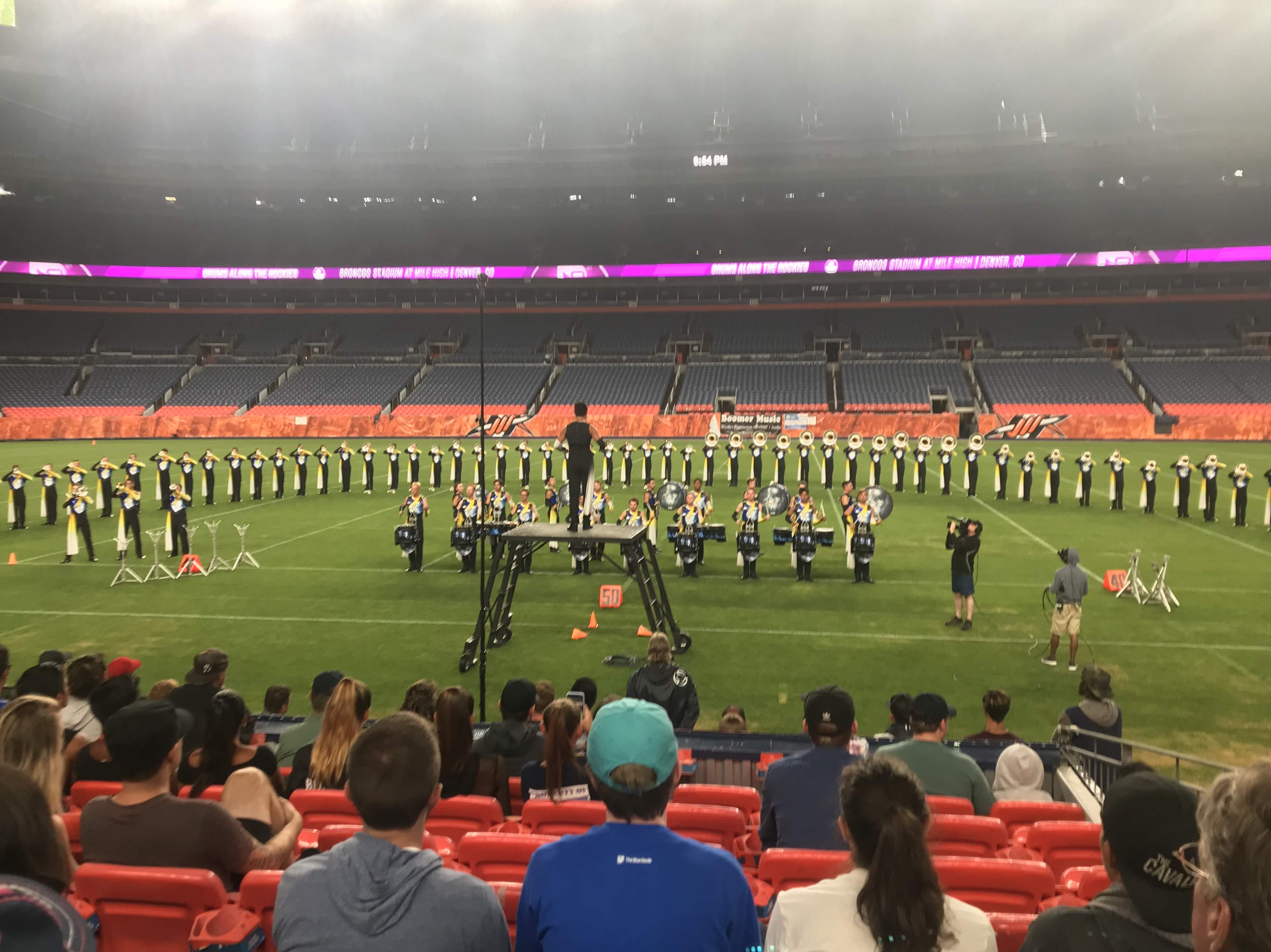 Last night we experienced the wildest drum corps show I can remember ever. We pulled into the parking lot for Drums Along The Rockies at Mile High stadium just as the sky was falling. Thunder, lightning and rain like I’ve rarely seen. The show, scheduled to start at 6, hadn’t started as we arrived at 6:30. Storm delay.

But, nobody really knew how long the delay would be as we sat in our cars, under the bridges, at Brooklyn’s, in buses, in the stadium under eaves and in concourses. People were leaving by 7, and as the bleakness continued, those that had no hope, streamed out of the parking lot.

But the diehard’s, in the face of absolute hopelessness, rain streaming down so fierce on our car you couldn’t hear yourself talk, and barely see out the window, lightning in every direction, some seemingly hitting the stadium, lighting up the 3 story tall white bronco perched well above the highest seats,

the people who have seen drum corps and know that the show must go on,

the parents who drove from Arizona to see their kids perform,

the kids, in their buses, uniforms on, horns in their hands, every cell in their body filled with energy, ready to experience the pleasure of release…

Drums along the Rockies facebook page:
Some Woman “At what point do they cancel?”.
Me: “When the Troopers don’t show up”.
Some Guy: “They just showed up, so, I guess the show is on!”.

At 8:30, with no sign that the show would go on, we were just about to leave, no sign of anything happening, we heard horns warming up.

We drove across the half empty parking lot to a horn line and witnessed 1 minute of some powerful horns before they casually marched away under the bridge, just as the rain subsided to a drizzle. To me, a diehard drum corps fan, this in itself was worth the drive.

We thought this was it. But, just for safe measure, we drove closer to the stadium.

With binoculars, I could see the main entrance where people were streaming out of the stadium. On Facebook, people were complaining that they were struggling getting refunds.

All hope was now gone.

But, anyone who has been in drum corps knows that kids want to play. So, Barb and I decided to walk towards the stadium, with little hope, and could soon hear drums over here and horns over there. We seemed to be the only people walking towards the stadium. I thought at least we would find a bathroom.

Then, a guy said the corps are doing stand stills at 9 in the stadium.

And they did! We walked in without a ticket, we, the believers, struggling against the leavers.

Next thing you know, we’re sitting on the 50 yard line, 10th row getting our faces blasted with goose bump worthy drum corps magic, even bringing a tear to my eye on a couple “notes”. The home town Blue Knights even performed their entire drill. And they are great this year.

It was a perfect post storm evening under the lights of Mile High with a depleted crowd of those who reap the spoils of hope.

That’s the ultimate drum corps experience to me. That’s what drum corps has always taught me. Every 10 minutes of pure pleasure is preceded by a thousand times that in pain, practice, patience and hope.

That’s what drum corps is all about.